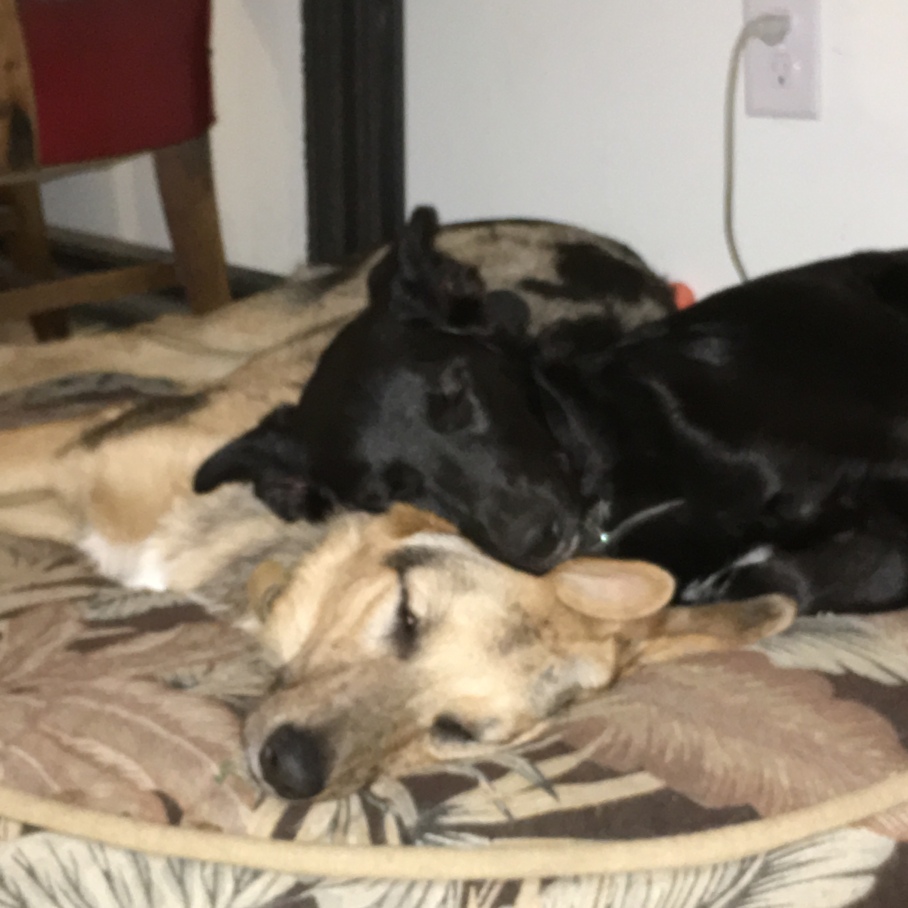 Giving y’all a puppy update (pupdate for short) has been on my to-do list for weeks. In fact, I loaded many of these images a couple of weeks ago and have been dragging my feet on putting words to this post.

On Saturday night, I got a phone call from a very choked-up Ben that made me think this pupdate could very possibly be another goodbye to a furry baby. But, thank you Lord, that is not the case! But, readers beware, there are some photos at the bottom of this post that will be hard to see. I’ll give you another warning below before the photos get painful.

Fletcher and Okra, at 9 months old, continue to grow like weeds and play chase like they are training as elite athletes. They are sweet and loving and although they now are big enough (and hairy enough) that they most of the time each take their own dog bed, they do sometimes still snuggle up together.

Especially if their alpha male (Ben) is taking a nap with them. 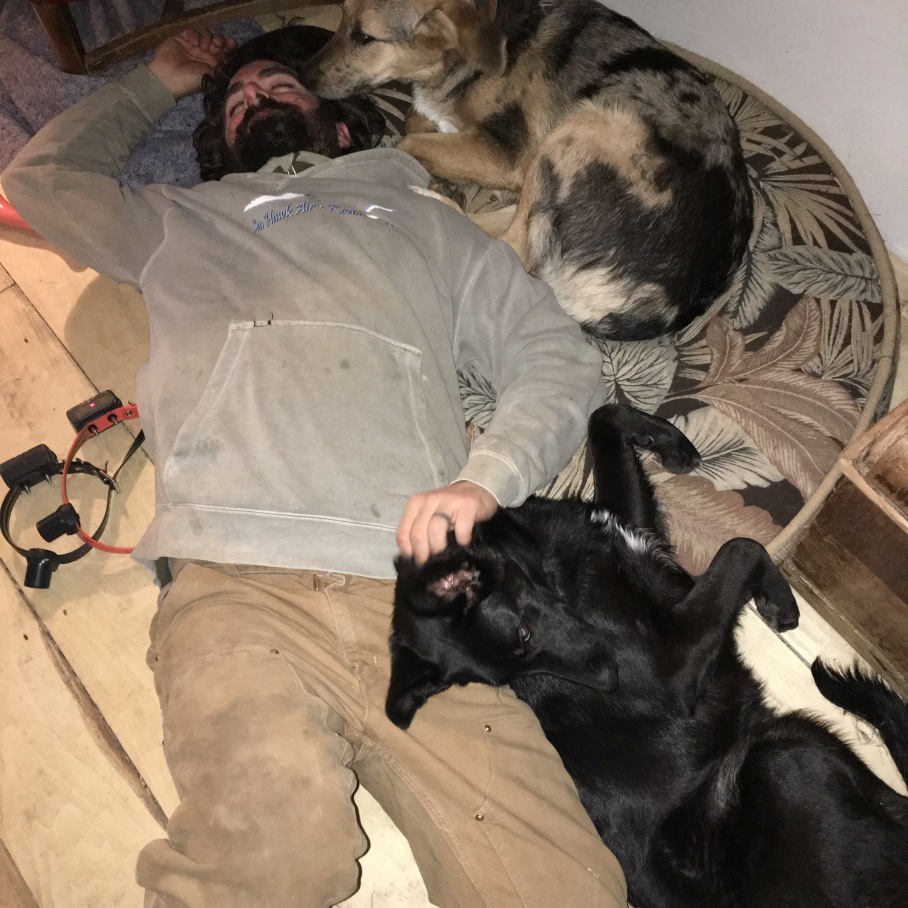 These three are quite the dog pack! Both puppies think Ben hung the moon. And whatever he says is the gospel. They are completely smitten! And so is he. 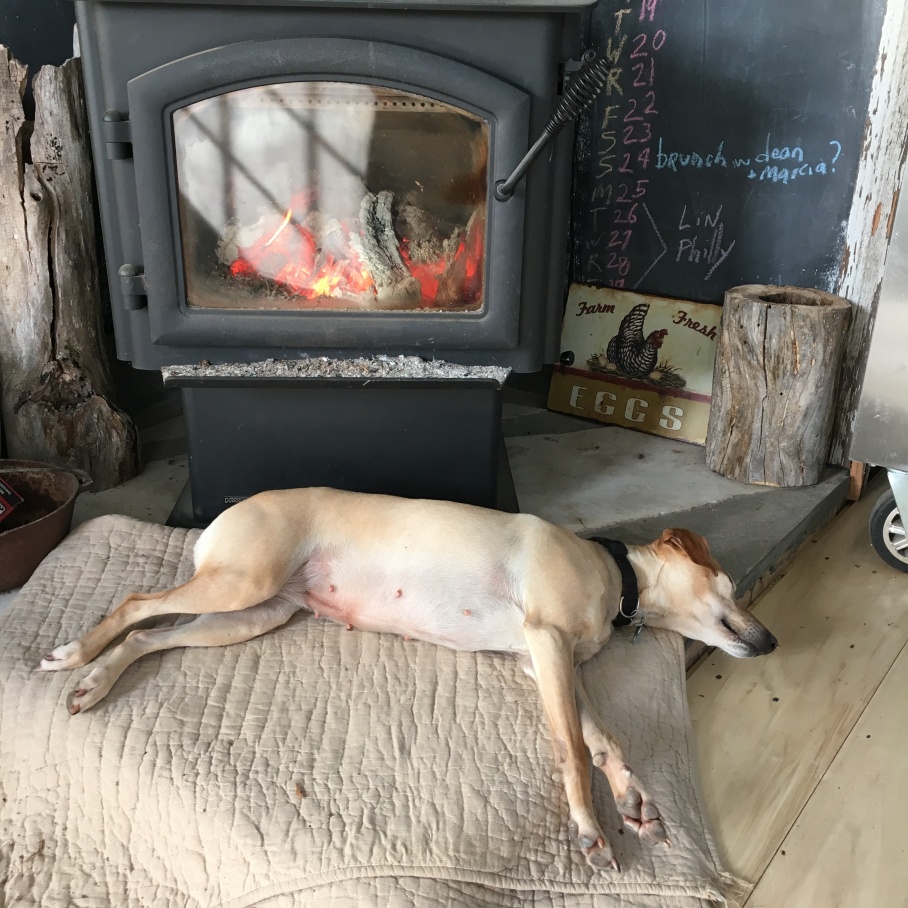 This month Milly turns 6! Her birthday is estimated, of course, because she’s a rescue dog. I adopted her from a co-worker’s adult daughter who had cared for Milly for almost a year but, long story short, Milly needed a new home.

Milly was discovered in the woods by a couple of deer hunters. She had been abandoned and was almost starved to death and the vet estimated her age at 9 months. When she came to live with Sadie and me, she was about 18 months old and I chose Valentine’s Day as her unofficial birthday. Today, as you can see, she certainly isn’t starving! She warms her full belly so close to the wood stove that I’m shocked she doesn’t burst into flames!

Alternately, she makes herself comfortable on the sofa—one of the bad habits I made the mistake of encouraging with Sadie. Thank goodness the puppies are not allowed on the furniture so my sofa and bed haven’t completely gone to the dogs.

But, as you can see, I have gone to the dogs! 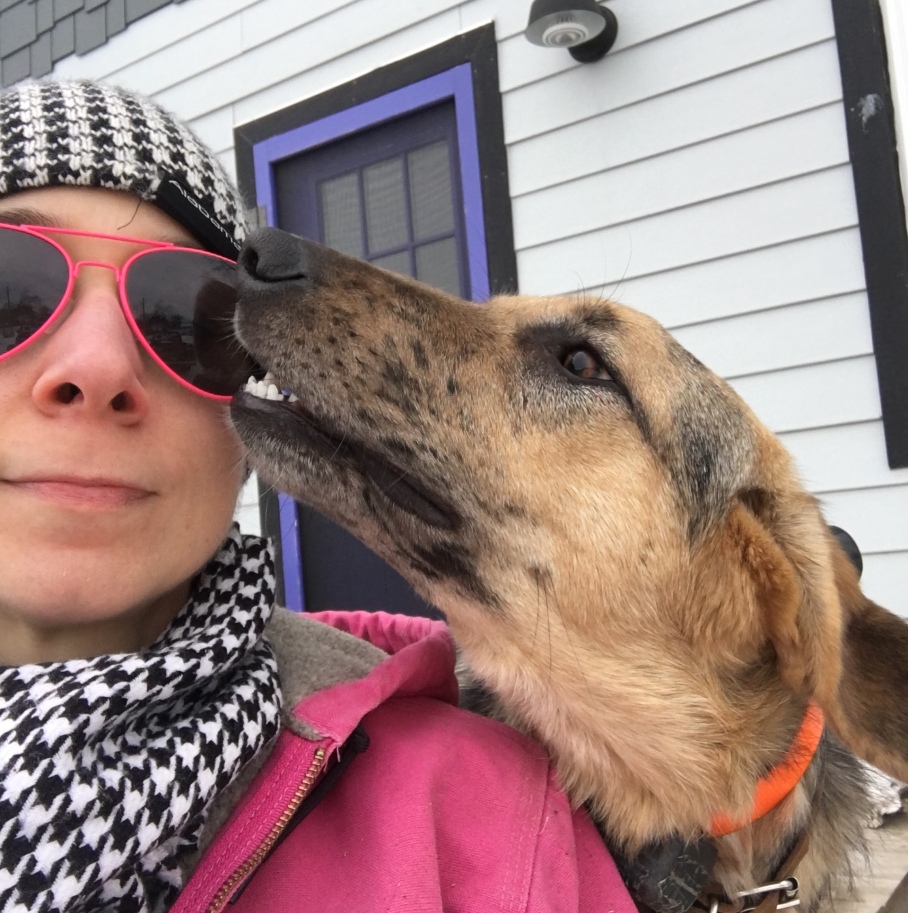 OK friends. Here’s where this story turns. The photos below may be hard for you to look at. So be warned. But here’s the story…

Saturday around 6pm Ben stepped out the back door to go close up the chicken house and, as he walked down the deck stairs, gave a whistle to the pups. They came running toward him. It was dark outside and there was a big truck barreling down the hill. Suddenly, the truck slammed on the brakes and Ben heard the terrible thump and yelp that stopped his heart. The truck didn’t stop…but Okra ran straight to Ben, inside the house, and to her crate. She was hurt. Badly.

He called our vet, Annie, and she came running to our house. He also called Elaine, our sweet neighbor, for emotional support. I was out of town for work; he called me, too and was understandably very upset. I’ve never heard him so shaken.

No one knew if Okra had actually been run over and crushed by the truck, and she was in deep shock. It was a good sign, of course, that she was walking, but Annie could already detect bruising on her lungs. She gave Okra pain meds and took her to her clinic.

On Sunday, Annie called with great news: Okra would be OK! She said it was “an absolute miracle” that not a single bone was broken. She has some serious road rash on her right side, and with the bruising on her lungs there is still a chance of blood clots, but with time she’ll be all healed up! Did I mention how much we love Annie? She’s an angel who makes house calls!

Sunday afternoon, when I was finally home, we went to Annie’s office to visit Okra. I wasn’t ready for how chewed-up she was.

This is it. The hard photos. Be warned. 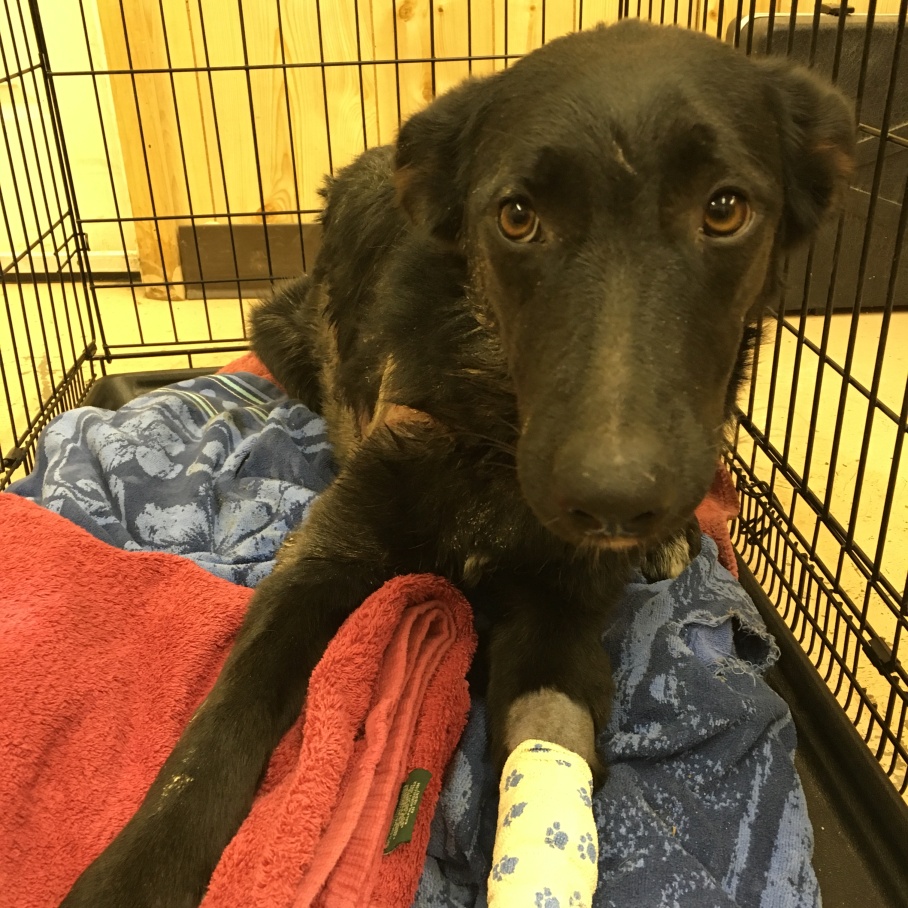 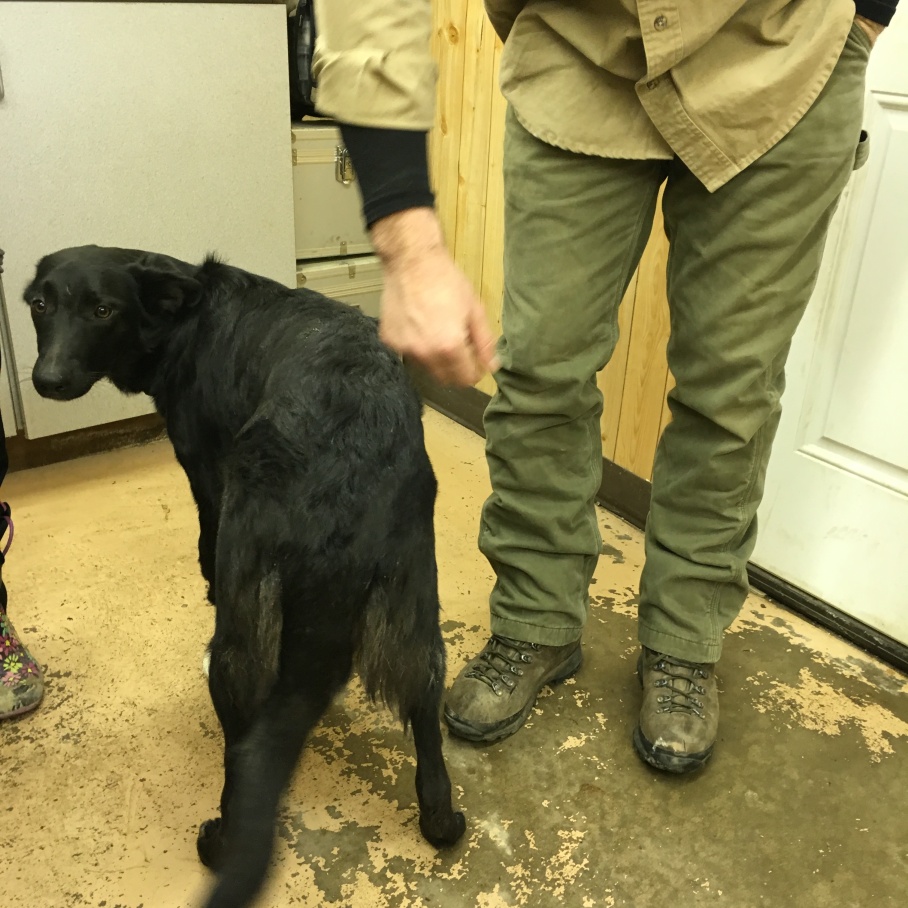 Okra stayed at Annie’s Sunday night, too, and since Annie was sure the shock had passed, it was safe to put Okra under anesthesia Monday morning and stitch her up as much as possible. We picked up our girl Monday afternoon. When we got home, the welcoming committee gathered: 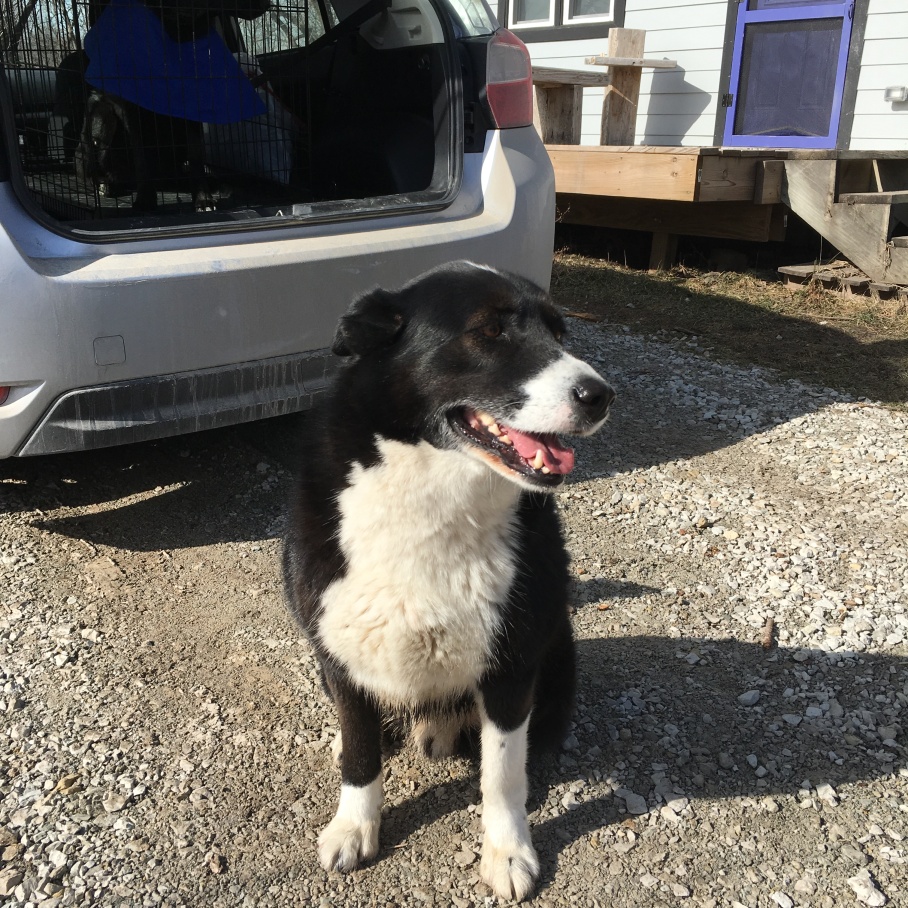 Jake met us halfway up our road and followed us home.

Fletcher barked like a fool! I couldn’t decide if he was scared of Okra’s fashionable/protective collar (like the old lamp shade ones but it’s flexible so she doesn’t knock stuff over) that keeps her from chewing/licking her wounds or if he was just so excited to see that she was OK he couldn’t help but yell at her!

Okra definitely isn’t her puppy self. She is moving slowly and sleeping a lot. She isn’t playing, and Fletcher is being very gentle and sweet with her. She retreats into her crate often.

Her wounds (gross photo below) include two big sutured places with drains so she doesn’t end up with pockets of infection at her shoulder and mid rib cage. The raw place in between is road rash. The skin is too chewed up there to be sutured. So it will just have to heal on its own. We are irrigating the wounds and applying antibiotic cream, as well as giving oral antibiotics and pain meds. 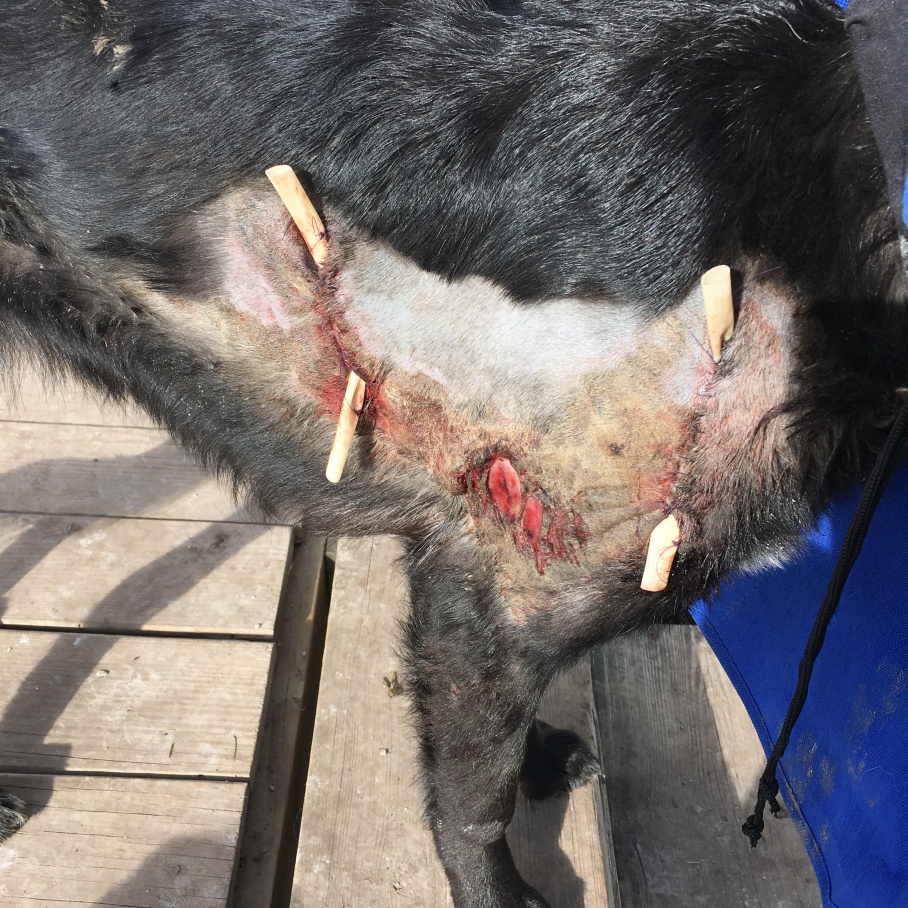 This is a very very lucky little girl! We considered asking Annie to just sew in a couple of reflectors while she was doing the stitching, making Okra a bit easier to see at night. Seriously, we will be getting a reflective vest for our black-of-night dog who doesn’t show up well in our no-street-lights rural location.

Thank you, friends, for keeping Ms. Okra in your thoughts and prayers as she heals. And, hopefully, this close call will keep her out of the road. We are beyond thankful that this sweet, sassy, too-smart-for-her-own-good girl is on the mend!

4 thoughts on “Time for a Pupdate”